TV broadcaster must indemnify cameraman for copyright infringement
In December 2020, the 3rd Vice-Presidency of the Rio Grande do Sul Court of Appeals (TJRS) dismissed the special appeal filed by TV Band to the Superior Court of Justice (“STJ”, the highest court for non-constitutional matters), thus upholding the condemnation of the network to pay compensation to a cameraman for copyright infringement, arising from the use of unauthorized video in a commercial campaign.

This is a controversy originated by a cameraman against Band, after seeing his images disclosed by the TV channel, without proper credit and without his prior consent for the use of the cinematographic work in advertisements of a television program. In view of this, the professional filed a lawsuit requesting compensation for moral and material damages, due to the violation of his copyrights, as provided by the Law No. 9610/98 (“Copyright Law”).

In the first instance, the plaintiff’s request was partially upheld, because, according to the judge, the use of the images by the broadcaster for commercial purposes and without authorization is not justified by the argument that “availability on Youtube would imply a sort of tacit authorization or assignment of rights that would allow use by third parties”. In addition, he decided that, although the improper use of video captures creates an obligation to pay indemnity to the author of the work, this amount should correspond to what could be charged for hiring the filming service. Thus, Band TV was sentenced to pay indemnity for material damages of R$ 10,000.00, and moral damages of R$ 5,000.00.

The broadcaster then appealed, but TJRS dismissed the appeal, maintaining their sentence and, furthermore, increasing the moral damages to R$ 8,000.00.

Band, then, tried to file a special appeal to STJ, arguing that its conduct of using the images of the cameraman available on YouTube would be lawful because there is an express provision that authorizes the reproduction of small excerpts of pre-existing works, provided that the reproduction itself is not the main objective of the new work (art. 46, VIII, Copyright Law). Additionally, to defend the lawfulness of its conduct, Band also claimed that there were no commercial purposes in the disclosure of the images. However, this appeal was dismissed by the appeals court judge responsible for the case, ending the matter for the time being.

On January 28, 2021, the Brazilian National Data Protection Authority (ANPD) published Ordinance No. 11 defining its regulatory agenda with 10 priority topics for the 2021-2022 biennium, after approval by the Board of Directors in its first Deliberative Meeting, held on January 20, 2021.

Nevertheless, the National Authority has also foreseen in this Ordinance the preparation of follow-up reports on the regulatory initiatives contemplated in the Regulatory Agenda, every six months, by the General Regulatory Coordination, with the possibility of readjusting the initiatives and goals.

Such initiatives shall be considered for the preparation of the guidelines for the Personal Data Protection and Privacy National Policy that will be prepared by the ANPD, as provided in 55-J, III, of Federal Law No. 13,709/2018 (“General Data Protection Law” or “LGPD”).

Please check below the chart that illustrates the initiatives foreseen by the ANPD according to their phases: 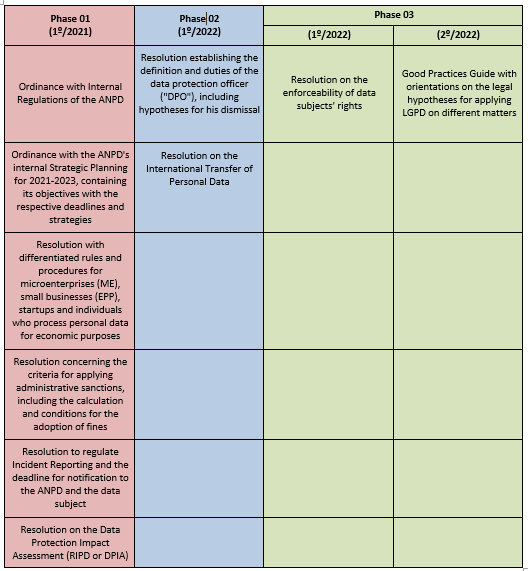