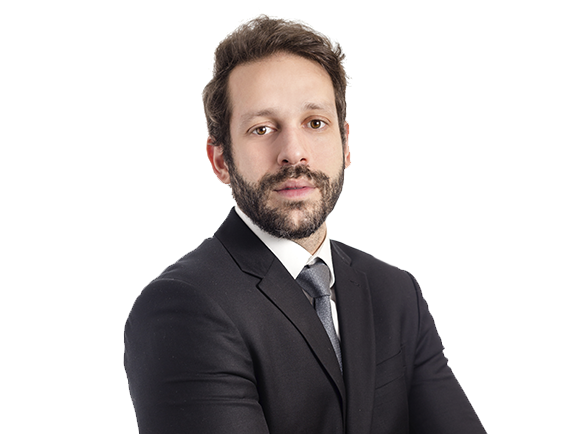 Jorge Luiz B. Gallo is a partner in Campos Mello Advogados’ Banking and Project Finance practice, based in São Paulo.
He has experience in domestic and international Capital Markets transactions, project finance work and contractual matters. He has actively participated in negotiations and the preparation of documents related to capital markets transactions (e.g. MTN Programmes, IPOs, and Issuance of Bonds), credit assignment agreements, loan agreements, credit facility agreements and project finance.
Recent editions of Chambers Latin America recognized Jorge as a leading individual in Banking & Finance, earning strong praise from market participants: “He is available 24 hours a day and is very objective” and “he knows to adapt operations to the client’s needs”.
Jorge began his career in Banking & Finance in 2005, as law clerk at Lefosse Advogados, where stayed until 2009, acting as associate. In 2010, he joined Campos Mello Advogados as associate and became partner in the end of 2018.

Representative Matter
• Representing Banco Santander in the assignment of several non-performing loan (NPL) portfolios with a total face value of almost R$10 billion;
• Representing Credit Suisse Brazil, through its Bahamas branch, on the execution of a US$30 million loan agreement with Grupo USJ, one of the largest Brazilian producers of sugar and ethanol, in order to finance the export of sugar, ethanol and by products;
• Advising  Fundo Único de Previdência Social do Estado do Rio de Janeiro – RIOPREVIDÊNCIA on a US$ 2.0 billion securitization of oil royalties together with BB Investimentos S.A. and BNP Paribas. We were responsible for all the negotiation, draft of related contracts and documents;
• Advising Banco ABN Amro S.A. in the restructuring of an Export Prepayment Agreement (and its related security agreements) in the amount of US$20,000,000 with Cantagalo General Grains S.A.;
• Advising Deutsche Bank in the negotiation of a Framework Agreement with TMF Brasil Administração e Gestão de Ativos Ltda (“TMF”), where Deutsche Bank assigned its trust services agreements with clients to TMF;
• Advising Wix.Com Ltd., an Israeli technology and website platform developer company, in the process of transformation and obtaining the necessary licenses for payment institution to operate in Brazil, before the Central Bank of Brazil;
• Advising Banco RCI Brasil S.A. on its fifth issuance of financial bills (letras financeiras) in the Brazilian local market under Rule No. 400 of the Brazilian Security Exchange Commission (CVM), in the total amount of R$300 million reais. This is the first public offering under Rule No. 400 of Banco RCI;
• Representing major Brazilian bank Banco do Brasil, acting through its Grand Cayman Branch, on the issuance of US$1.5 billion worth of 8.5% perpetual non-cumulative junior subordinated securities, one of the first transactions under Brazil’s new ‘hybrid capital’ rules;
• Advising, as deal counsel,  Camargo Corrêa S.A. (“CCSA”) and BB – Banco de Investimento S.A.on CCSA’s R$ 1.1 billion Reais issuance of debentures in the Brazilian local market under Rule No. 476 of the Brazilian Security Exchange Commission (CVM).