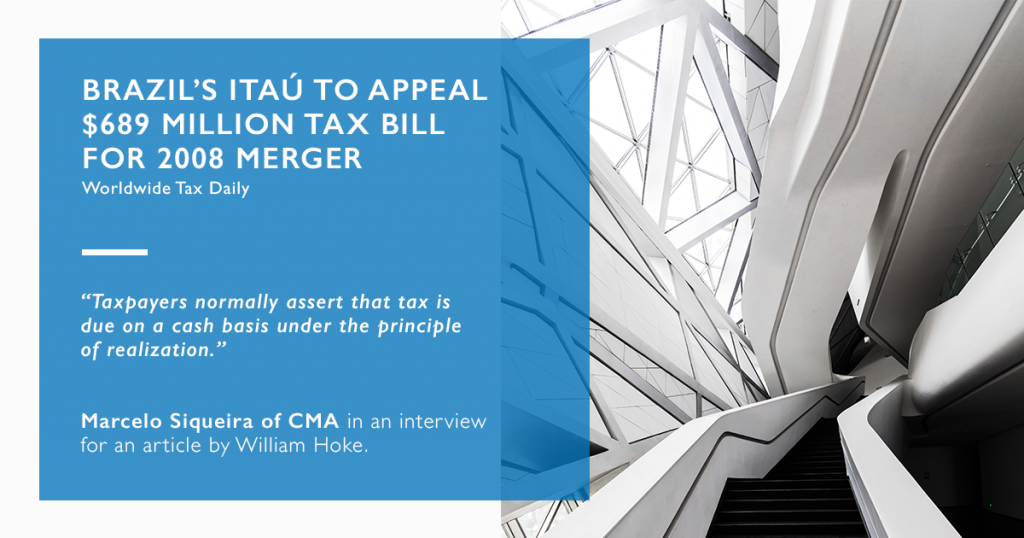 Brazil’s Itaú Unibanco Holding SA will reportedly appeal a decision by an administrative tax appeals board denying the bank’s challenge of a BRL 2.7 billion (around $689 million) assessment related to a 2008 merger.

The bank holding company, the largest financial conglomerate in the Southern Hemisphere, was formed in 2008 following the merger of Banco Itaú and Unibanco. As part of the merger agreement, shareholders of Cia E. Johnson de Participações contributed their stock to Itaú Unibanco Holding in exchange for shares in the newly formed company. The subsidiary was subsequently merged into its parent and ceased to exist. The Federal Revenue Service (RFB) claimed that Itaú Unibanco Holding owed capital gains tax on the original contribution of the subsidiary’s shares and issued an assessment for the amount due.

The taxpayer was unsuccessful with its claim at a lower level of the administrative tax appeals system (CARF) that if there was any capital gain, any corresponding tax owed was payable by the previous shareholders of Cia E. Johnson de Participações. It then brought the matter before the highest-level CARF panel, asking for a review of the case on the merits of the underlying tax issue and that it had been charged penalties for both underpayment of estimated tax and failure to pay the tax when due. The panel’s eight members deadlocked over the issues, which under CARF rules meant that the vote of the body’s president was counted twice. Because the presiding officer, who was appointed by the RFB, sided with the tax agency, Itaú Unibanco Holding lost the case. (Many Brazilian tax lawyers have complained that the so-called quality votes cast by CARF’s presiding officers are disproportionately in favor of the RFB.)

Ana Claudia Akie Utumi, a tax lawyer with Utumi Advogados, said the highest-level CARF boards can decide a challenge on the merits of the case only if the lower-level panel’s ruling conflicts with a decision on a similar case by another lower-level board. “You have to find a case that is similar to yours,” Utumi said. “In this case, the judges understood that the case was not so similar to justify acceptance of an appeal on merits of the case.”

Utumi said that while the highest-level panel did hear the taxpayer’s challenge regardiing the penalties charged, it ruled that they had been properly assessed.

Itaú Unibanco Holding didn’t respond by press time to a request for comment. Jota, a legal website specializing in tax appeals, reported June 6 that the bank said it intends to appeal the decision. According to Jota, the holding company said, “The assessment disregarded a corporate transaction approved by the Central Bank of Brazil, [the Administrative Council for Economic Defense], and [Brazil’s] Securities and Exchange Commission, involved a company that did not even exist at the time of the events, and charged a capital gains tax on a transaction for which there was no sale of shares or availability of funds.”

Marcelo Gustavo Silva Siqueira of Campos Mello Advogados said taxpayers normally assert that tax is due on a cash basis under the principle of realization. “Legal entities may also claim that their shares were not realized but just replaced by other [shares], with such investment being subject to the net equity pick-up method, which is not taxable under Brazilian income tax legislation,” he said.

Utumi said Itaú Unibanco Holding likely has a good chance of prevailing with a court appeal. “I think Itaú is correct on the merits,” she said. “In this case, there was no change in E. Johnson itself other than the change in shareholders. This type of transaction is quite common, where the share exchange ratio is determined on the market value of the companies involved in the merger of shares, but this merger itself was done at cost value, as allowed by Brazilian law. There were other cases where CARF upheld tax assessments, but we still don’t have significant decisions in the judicial courts.”